Still haven’t figured out why 2000 people showed up at a Guster show in South Bend Indiana, but it was a good one with the help of sophomore Kevin Reen on violin and freshman Mike Murphy on tuba. After the show, we went out to a few campus parties and held Adam’s feet above his head while he did a keg stand (24 seconds… that’s right, here in the *road journal* you hear about things they’re afraid to talk about in the *guslog*). Sorry we don’t have pictures, but we did snap a few shots during our tour of the Notre Dame campus before the show…

This is the “Touchdown Jesus.” It’s a big mural of Jesus on the side of a library. When Ryan mentioned the Touchdown Jesus during the show, people cheered. They teach this to you in Rock School 101: Make a reference to a local landmark. 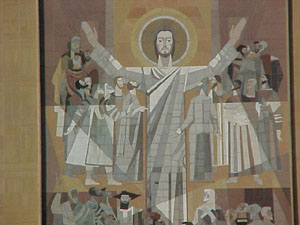 This is another statue of Jesus. It looks as if he was also attempting to make the touchdown signal but was cast in concrete before he could finish. 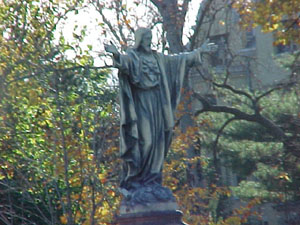 This building has a big gold figure of Mary atop its dome. She overlooks what is known as “The God Quad.” 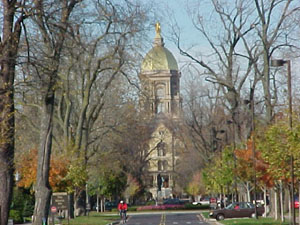 This is Starsky & Hutch. They are two gentiles who are now syndicated on The Nashville Network, which is the cable channel of choice in the Gusbus.