End of the tour. This is where I go through and delete all the pictures left on the camera’s disk but realize that I never turned the best ones into road journals. Like this one:

It’s Joe preparing for take off on the Alpine Slide after our set at the Winter Park ski resort in Colorado. The picture really captures the excitement of the starting line, the restless anticipation of trekking down a manmade cement chute in the middle of a steep lawn. What the picture fails to capture is Joe’s philosophical approach to the event… the I’m Gonna Get My Five Bucks Worth & Savor Every Minute Of This By Inching Down At Two Miles Per Hour approach. That comes across better in this other photo: 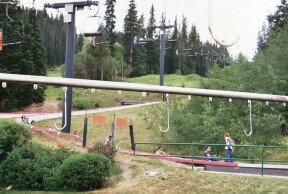 You can’t hear them, but all seven of those frustrated, inert kids stuck behind him are screaming cuss-words at him. Joe was beautifully unapologetic afterwards. There was a nice view of the Rockies and stuff.

While watching it back, I was struck mostly by the “set” they chose for us. Is it me, or did it say “ALWAYS COOL — AIR CONDITIONED” in giant letters on the wall behind us? Pasty said they choose a set to try to match the vibe of the artist. Then he grinned. I said “what’s so funny? We’re always cool — air conditioned” and he said nothing… he just grabbed the digital camera and showed me this: 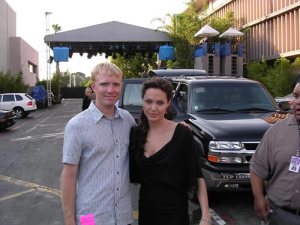 That’s his hand on her shoulder!! No one in the band met her, but Pasty snagged a photo with Angelina Jolie before she got in the Bentley that was waiting to take her to the premier of Tomb Raider. With the help of the zoom feature of photoshop, you can see the actual, physical pain and complete mental anguish involved in this activity for her… 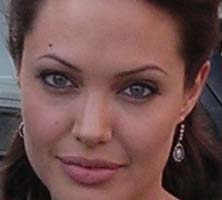 Or, maybe I’ve just spent so much time with the picture that I’m reading things into it now.

I know that by writing a facial-hair-themed entry right now I’m inviting accusations that road journal content is borrowed from the new & improved Guslog. But it’s really just a coincidence. I don’t read the Guslog… I mean, I know some of you guys may check it now and then, and that’s cool… but I’m not into it. It’s just not my kind of thing. Y’know.

So people have been throwing ping pong balls at us during the outro to Airport Song ever since we recorded a ping pong match on the track back in 1997. It’s a fun tradition. Sometimes when mopping up the stage after the show, you discover that there are messages written on the ping pong balls. For instance:

Play “Getting Even”
Let Brian Sing
I will perform {insert sexual favor here} on you if you call {insert bogus phone number that never pans out here} after the show!
Play “Cocoon”

This sort of thing. But today I got a pretty unique message:

BRIAN — PLEASE SHAVE! YOU LOOK LIKE AN OLD TESTAMENT JEW.

Ouch. I was just trying to recapture the magic from the back cover of Lost & Gone Forever here. I didn’t want to get Old Testament on anyone. Mainly I’ve been inspired by Tommy, our new truck driver, who told me the other day that he hadn’t seen his chin since 1967.

Brian Rosenworcel, has not seen chin since June, 2003.

We didn’t book a real Seattle show on the summer tour, so we did one of our “in-store” sets at a record shop while passing through town today. These sets are usually about a half hour long, completely acoustic, and involve my head perched atop Ryan’s guitar like a hood ornament (see photo, above).

The thing that separated this in-store from the rest was that the Seattle store gave us a cooler with six cans of Budweiser in it. And so we brought them on stage, bragged about them, held them above our heads, up to our lips, and close to our hearts. Had it been a full case of Bud cans, we might have had a repeat performance of our 1997 show at a Princeton University “Eating Club” (pretentious for “fraternity”), when Ryan drank so much on stage that he couldn’t hold his bladder and peed in a Nantucket Nectar bottle and then held the bottle over his head victoriously. Note the similar expressions: 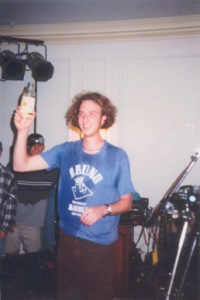 Every time we play a venue with a mechanical bull in the back of the room it reminds me of our early days, before we added the -TER, when we used to play those Tufts open mic nights at those campus coffeehouses with the mechanical bulls in the back of the room. Ryan was so inspired, he’s threatening to revive the Guslog just so he can air footage of Guster members on bull. Here is a pic of Ryan, with his BK crown, his airport card, and his clean white t-shirt:

Here is a pic of Adam on a tube in Indianapolis, because I am cleaning out my digital camera’s cache, and because nudity translates into Road Journal Book sales.

And finally here are some bull shots. Who’s doing a better job pretending that the bull is actually moving, me or Pasty?

Woke up this morning and the bus was parked in some lot on West Grand Blvd in Detroit. Pasty said our hotel wasn’t within walking distance,but there were a couple of blue port-o-toilets in the parking lot that seemed fresh enough. I took my chance on the Blue Room on the right, having had good luck with Blue Rooms on the right in the past. It was pretty stinky on the inside.

Definitely hadn’t been cleaned since the 4th of July Shit Party last night. I decided to suck it up, do it quickly with my nose inside my shirt, and be done with it. And maybe I was a little woozy from the smell, but I swear I felt the entire Blue Room levitate. 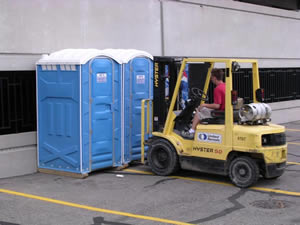 Special thanks to Pasty for capturing the incident on his camera rather than telling the dude with the forklift that I was in there. When I realized what was happening I started banging on the walls and screaming but I guess he couldn’t hear me over the sound of his forklift. I was afraid that we’d hit a bump and The Hole would unearth it’s… bounty.

Okay, I’m making all this up. I wasn’t really inside that port-o-toilet. And I don’t plan on making a habit of lying in the road journal, but I just felt like we needed some action here. The truth is the week in the Midwest has been excellent but relatively routine. For instance, here are some highlights:

CLEVELAND: The local arts weekly ran a preview of our show and said that it’s worth checking out because we won Best Local Independent Live Show in the 1997 Boston Phoenix Music Poll. Someone needs to send Cleveland a copy of our latest bio.

CHICAGO: Only 10% of the crowd passed out from heat exhaustion this time, a step up from the A. Finkl debacle, where we lost a quarter of the crowd to dehydration.

DETROIT: The show hasn’t happened yet, but the band that’s on before us is called “Floetry” and Michael Jordan is their manager. I plan to take pictures.

Summerfest is a ten-day music festival they hold in Milwaukee every year. There are like eight stages, with bands going from noon to midnight on most of them. We played it three years ago opening for Ben Harper and were glad to return to play the big amphitheater this year. We feared an Artie Fufkin Spinal Tap moment at our 4pm “signing,” but enough people turned out to make it worthwhile.

Technical difficulties led to a last minute scratch of “Either Way” from the set list. That one’s gonna be on the DL for a while, so we added promising rookie “Come Downstairs & Say Hello” to the line-up even though it’s clearly not ready for a 25,000 seat amphitheater half full of people waiting for local heroes The Bodeans to take over. It went over surprisingly well though, and we seem more confident playing it. The first couple times we all had that “oh shit what comes next” feeling while it went down.

And lucky for me my favorite band was playing one stage over from us after our set. The Guster laminate did the trick and I ended up standing on stage, behind the monitor desk, twenty feet from Jeff Tweedy, watching a legendary band play a brilliant set in their prime. It was one of those shows where at the end of every song you turned to the person next to you, shook your head, and said “holy shit.” Jesus etc. nearly made me cry. I am just proud to also be in a band with the word Jesus in a song title. Go Wilco.