Penn’s Landing is one of those venues that’s set up completely outdoors — it’s pretty much a parking lot beneath the Benjamin Franklin Bridge.

There were rain clouds coming and going all day, but somehow the rain held out until after our set. It was actually a really nice night for a concert. So then why does Joe look so…completely God-awful? And why did Gordon punch a dent into the towel dispenser in the trailer bathroom?

Before showtime they lost running water at the venue, so our lush little trailer bathroom wasn’t flushable. We’ve been in this predicament before, mind you. But Joe had just started a shower and his water pressure turned to a drool in front of his eyes. joe had to take what we call a “Deer Park Shower” and that’s no fun for anyone.

Gord punched the towel dispenser for lots of reason, though I’m sure having no towels was one of them, and having nowhere to shit was another, and all of us turning into a bunch of spoiled rockstars is another still…there were band turds in every toilet you could find in the trailer by the time we took the stage.

After the show we expected the water to be back but it wasn’t. So we told all the guests at our “aftershow meet and greet” event in the trailer that the egg salad had been left out all day. It was the quickest meet and greet ever.

At least the show was awesome. We played “Long Way Down” for the first time. Thanks to Dan and Chris for playing horns And Eric from Sam Roberts’ band for learning the wuriltzer part. And thanks to Buster, the Lakewood NJ single A minor league baseball Blue Claw. And thanks to SWOOP from the Philadelphia Eagles. And thanks to Nick Carter for emailing us and telling us that he had the exact same inflatable cowboy suit from the Amsterdam video. We managed to get three mascots on stage without knocking over any mic stands.

I need my left hand to stop bleeding when I hit it against my drums. The Krazy Glue isn’t working anymore… the cut gets bigger every night even if I stuff it with glue before the show. Today I biked over to the Rite Aid in downtown Albany and bought a few items:

I used the “2nd Skin” thing to cover the cut, and I reinforced the adhesive side with Krazy Glue to make sure it didn’t fall off right away. (Note: I also used the Krazy Glue to glue my thumb to my palm).

I made it about halfway through the set before the bandage fell off, during All The Way Up To Heaven, and I bled on my drums for the rest of the night.

Someone said I should fill a pair of deerskin gloves with Crack Creme or Bag Balm, and sleep with them on all night — which seems like a good idea except that it involves sleeping with wet deerskin gloves on all night. I think I’d rather bleed on my drums.

So let’s review the history of our dorky Boston stage entrances so far:

April 1998 — Somerville Theater, we take the stage in sweatsuits, wristbands, and tube socks to the theme from Rocky. (“Eye of the Tiger” by Survivor for those of you born in the 90’s).

October 1999 — Orpheum Theater, we get lowered from the ceiling to the stage in a three-person chair while wearing tuxedos. I believe the music is the theme from “2001: A Space Odyssey.”

August 2000 — Harborlights, we paddled into a dock behind the venue in a yellow rubber dinghy with lifejackets on, filming it and broadcasting the video live, soundtracked by the Foreplay part of Boston’s “Foreplay/Long Time.”

December 2002 — Orpheum Theater, running out of ideas, we do the Price Is Right “Come On Down” thing for like the twelfth time. Planted in the crowd with big name tags, we freak out and run down the aisles to the stage when our names are called. Music is The Price is Right theme. Duh.

June 2003 — City Hall Plaza, not really planning any special entrance we are thrilled to discover after the show that the mayor has introduced us as “Goose-ter.” Sometimes the most brilliant moments are accidents.

That brings us to last weekend’s show at Harborlights. A kid named Scott sent us an email a few weeks ago pitching the idea of a Mr Rogers-themed entrance for the Boston show, so we ran with it. Thanks Scott. We rented the trolley, rode it in, played the It’s A Beautiful Day In The Neighborhood intro theme, and changed into zip-up cardigan sweaters and blue keds on stage before even picking up our instruments. 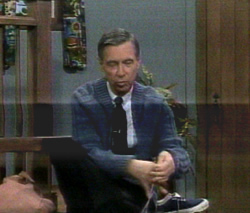 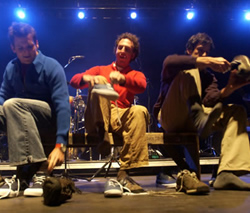 For the record, Ryan and Adam are actually taking off their shoes and putting on the flat blue Fred Rogers sneakers. I am taking off the flat blue sneakers and putting on my regular shoes. Some of us have to play kick drums. Joe came out for “I Spy” to thunderous silence dressed as Mr McFeelie, the mailman guy that very few people seem to know from Mr Rogers. He looked good but he said his moustache fucked up his harmonica solo during “Backyard.”

It wasn’t until we actually watched a couple of episodes of Mr Rogers’ Neighborhood that I remembered just how creepy the show was.

Plus that short-haired librarian-looking puppet from the Land of Make Believe used to always creep me out. Why did her nose have to have nasty broken blood vessels on the end of it? I *hated* her when I was a kid. Hate her.

I don’t know what to do next in Boston. I think we peaked In The Year 2000. A girl named Kimberly just sent us this idea in an email, what do you think?:

find 3 elementary-aged kids who resemble the 3 of you, hook 2 of them up with guitars and slap some tape on young thundergod’s hands, and have them all ride pigs down the aisles to symbolize the journey through childhood and into the piggish world of adult corruption. then you guys walk out with huge lollipops with “greed”, “hate”, and “adultery” written on them, and offer them to the kids, who then kick you in the nuts, displaying the sound morality of guster in their refusal to accept these evil notions. the kids run off, and then you’re good to go. i think this would make a powerful statement.

Turns out the Charlottesville Performing Arts Center is just a fancy name for the Charlottesville Public High School Auditorium. So we spent the afternoon sitting in our Target why-are-these-so-comfortable-these-really-shouldn’t-be-this-comfortable chairs on the front lawn of the high school. Allyson kept getting offended by the marching band, who were doing drills on the football field, but you see Allyson can be as high and mighty as she wants about this because she used to twirl rifles in “Drum Core” back in California, which was like marching band boot camp or something.

Here she is showing our bus driver, Sarge, how to twirl a rifle:

And here’s Sarge showing me how to cock the rifle: 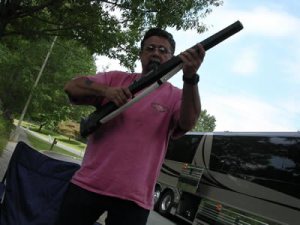 And here’s Sarge telling me about how long I’d last in the military:

This morning Allyson realized that two pairs of sneakers on the bus probably didn’t belong to anyone on our bus. After asking around, we couldn’t figure out whose they were. They were like the kind of sneakers that athletic people wear. So we asked Sarge who had the bus before us and he said “Limp Bizkit,” which means that these are definitely Fred Durst’s shoes:

We left them on stage with us for most of the night and then gave them to Ilan, the guest violin guy from the University of Richmond.

Got this picture from a friend who happened to be backstage with a camera at our rooftop show in Portland Maine this summer:

Not only did Ryan take off his pants in front of 5000 people because they couldn’t see his lower half, but he left his ass hanging out for much of the set too. There appears to be a load in his drawers too, but it’s just his remote pack to his in-ear monitors.

Right now we’re in Asheville NC for the first time in six years. Highlights from the last couple of days include:

George Washington University: We put on good shows the day after we take red-eye flights. Jason Mraz opened up, and when we saw him backstage we noticed that he was wearing the same hat and headphones that he’s wearing on his album cover. I guess it’s become like a Tiger Woods / Nike cap thing.

Day off in Asheville: Asheville is a mountain town and we hiked up to a clearing where there’s a nice view of the Blue Ridge Mountains. I nearly stepped on a thick triangle-headed rattlesnake that was all coiled up, sleeping next to a tree, waiting for my sandal to wake it up so it could fill my ankle with its death juice. Later, after I ran about a hundred feet away with my heels kicking my ass, Ryan walked up to it and poked it with a stick. He finally stopped when he got its tail to “make the rattling noise” — I guess we’re all products of the Animal Planet era at this point. That Crocodile Hunter guy that kind of looks like Steve Lillywhite has us all believing we’re immortal.

Notre Dame held its big concert with Guster & Black Eyed Peas on Friday night to try and steer kids away from the gigantic pit of hedonism that is the annual “Rally in the Alley” party in the Turtle Creek apartments on campus. And no they were not successful. Though most people started out at the concert, one by one the crowd made its way to the party during the show, where the members of our band eventually ended up soon after our last song. Check out this comic from the school paper — it appears Ryan’s guitar has turned into a beer funnel, Adam’s microphone has morphed into a 40, and my bongos have become a pair of kegs.

For the record, Black Eyed Peas were at the Rally in the Alley too and they were drunker than we were.