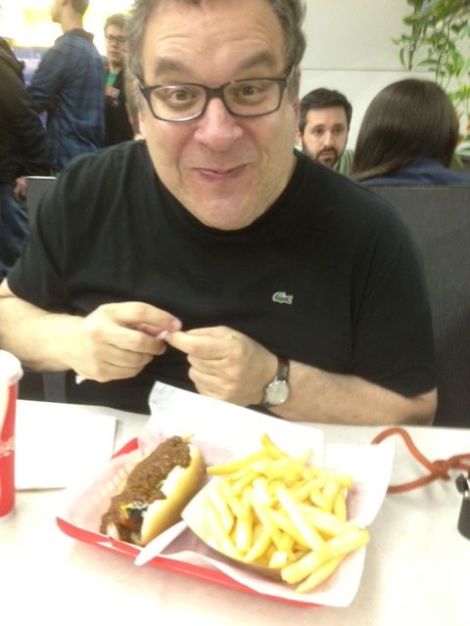 Jeff Garlin only lasted a few nights on the bus before he decided he was taking planes and trains to the rest of the shows on the tour, but he still got a little adventurous last night in DC and went to Ben’s Chili Bowl with me for dinner.

One of us wiped the chili off of our half-smoked hot dog.  Just saying.

Here’s a ten second clip from the Passover Seder we threw together in the basement of the Pabst Theater in Milwaukee last week.  It’s hard to understand what’s going on, but I’ll try to help — Adam is describing the relevance of the shankbone or something, and we’re all waiting patiently to eat.  Ryan downs the gefilte fish on his plate, before he’s supposed to, and Jeff gets pissed.  It’s our very own Curb Your Enthusiasm Moment!

3)  We’re shooting a DVD of the show tonight in Tarrytown!

Last night at the Sheldon Theater in St Louis Ryan asked people to bring “framed art” to help decorate the stage.  As it turns out, the people who read Ryan’s Twitter feed and bring these items end up with a much greater chance of having their requests played during the “free for all” portion of the acoustic shows.  It helps give a little structure to a situation that otherwise just rewards the squeakiest wheels in the audience.

After a handful of framed photos made it to the stage in St Louis, some guy stepped forward with a giant framed illustration of a dripping wet Michael Landon holding a squid in his arms, and so naturally we let that guy have a couple of requests.  “Careful” and “Center of Attention” were his choices. That guy could have written the rest of the night’s set list as far as I’m concerned.

We were slightly obsessed with The Landon Squid, passive aggressively jostling for dibs throughout the show, until the very end when we publicly performed a band rock-paper-scissors for rights to it.  Adam won, and after the show the guy who brought the Landon Squid confessed that it was a gift from his son to him, and that he hadn’t intended for us to actually take ownership of it.  Fair enough, we signed it and returned it.

Fast forward to not even 11 hours later, we found ourselves in a packed bar near Wrigley Field performing in front of a drunken crowd of Cub’s fans.  Ten in the morning!  Apparently they start drinking at 6am on opening day.  Billy Corgan from Smashing Pumpkins and Jeff Garlin from Curb Your Enthusiasm were there.  While the radio DJ was interviewing Billy Corgan, I had a once-in-a-lifetime chance to snap a photo of Corgan and our monitor guy / keyboard player Josh Cohen in the same frame.  They share a resemblance: 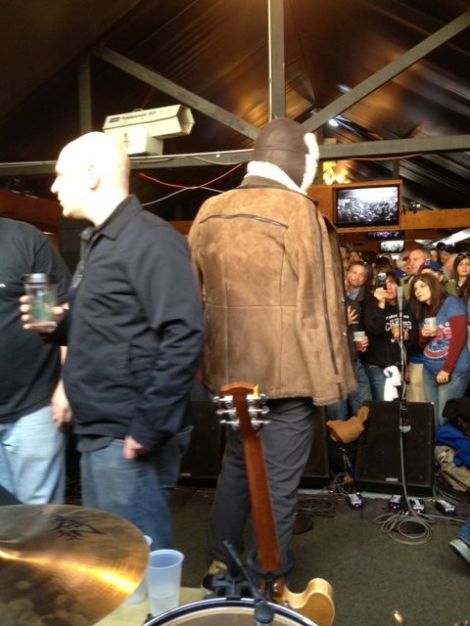 Josh hasn’t had a single hair on his head since I met him when he was 21 years old.  Unfortunately Corgan was wearing an old-timey winter hat and despite all my rage, I couldn’t get his face in the photo from behind my drum kit.  You’ll just have to trust me that he’s holding the microphone in the photo below.

Garlin is actually going to sleep on the tour bus tonight in a bunk.  We’ll see how that goes.

The other night in a pleasant little suburban village north of Philly our opener finished at 8:30 and the stage was set and ready to go soon after that, so we thought, being a weeknight, we’d go on at 8:50 rather than 9 and make it an early night.

No such luck.  Charlene still had curlers in her hair.  Curlers!

There’s girl energy on the bus for the first time ever.  Three girls –left to right above — April (cello), Charlene (violin), and Katie (merchandise).  When you live on a bus and fart in the narrow aisle between the bunks it can make things complicated.  You have to think twice before going to bed in The Boxers Where You Pop Out The Hole.  You have to wear Bamboxers almost every day.

Or, if you’re Luke, after the show you have a couple of pints at the Karaoke bar in Keswick or Glenside, or wherever we were, and you choose “Fa Fa” from the book.  Before handing you the mic, the karaoke master dj man says “I don’t think we’ve ever played this one here!”