The show in Munich was in this little arts compound on the outskirts of the city.  There was a “female only flea market” that we had to walk through to get to our dressing room.  Like just about every other European show, it gave way to Disco Night in the basement when it was over, which we avoided.  But there were lots of German people hanging around and drinking outside the venue afterwards, and I met quite a few of them.

Among them was a 20 year old girl named Eileen, who was not drinking (though the legal age is 16 for beer), but was insisting that I unlock our trailer full of gear to get out the “oook-lai” … it took me about ten minutes and a few translators to figure out she wanted to play our ukulele.  It was worth hunting down a key to the trailer and digging through the road cases to unearth the instrument to hear her play a few songs in the dark.

That REM song is an All Timer, and it sounds better with an adorable German street musician performing it for you in what sounds like an Irish accent.  After a Bon Iver tune and a few originals, Eileen and her sister a few other locals formed a posse that roamed the streets looking for a place named Cu.Bar that ultimately wouldn’t let us in.  We ended up at Bar Kilombo down the street, closing it down with another ukulele set and foregoing the late night Doner Kebab for the first time on the entire European tour. I believe questionable promises were made to Eileen that she would be the support act on our entire next German tour. Anyway, Eileen please learn “What You Call Love” on the uke and we can play it together next time we’re in Germany. Ciao! 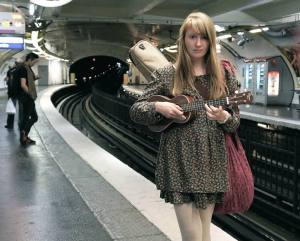 One response to “Continental Drift Divide”