It was a thrilling 48 hours in Maine this year.  Conditions were extreme!  We met so many people and played our asses off.  Let’s take a tour of On the Ocean 2018, shall we? 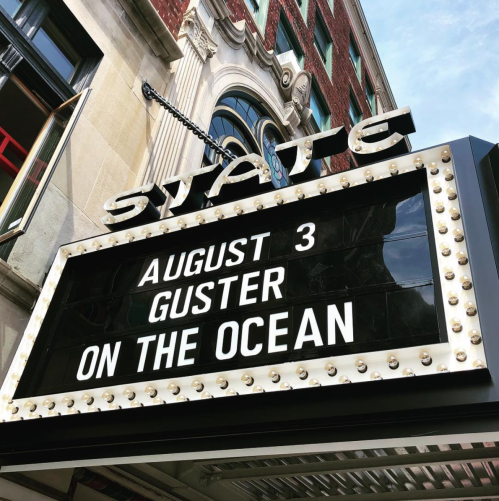 It all started Friday night at the State Theater in Portland, where we shot our GUSTER ON ICE live dvd fourteen years ago.  We had super muggy weather all weekend and the State Theater doesn’t have air conditioning — so it was a disgusting sweat lodge of a night and we all just had to commit to it.  Early in the set we had a show-stopping guitar tuning snafu and had to adjust the setlist.  Ryan was flummoxed!  Oh no, would Guster blow their opening night of their big festival?

“No way, not under my watch!” said legendary conguero Brian Rosenworcel as he single-handedly saved the show with his god-awful rendition of “Hunger Strike” by Temple of the Dog mid-set.  You see, it was a “ping pong ball request night”, and we entertained many projectile requests, including one request that I sing, and one request that we play a deep b-side called “Timothy Leary” which didn’t make it onto Ganging Up on the Sun even though it’s kind of good.  After a wonky start, we kind of crushed the State Theater show in the end. 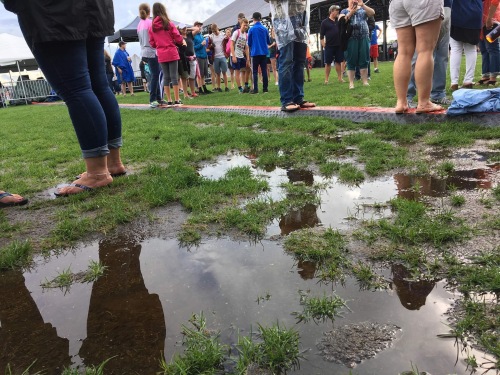 Saturday was the kind of day where you checked the weather on your phone and wondered why you paid $4 for the Dark Sky app just so it could lie to you and toy with your emotions.  It was soggy and thunderstorms were in the forecast.  I started the day by taking my kids to the Reverb Service Project that Adam set up.  We helped restore a trail in Westbrook Maine that will connect rivers.  Or something.  Pretty much we got devoured by mosquitoes but made lifelong friendships.  Adam and my twins enjoying their lifelong friendship, for instance:

Rain moved the “sneak preview album listening party” from a remote Maine island to the Mast Landing Brewery (who brewed a “Guster Big Friendly Pale Ale” for the weekend).  Adam entertained the crowd but declined to do one of his infamous keg stands because we are a family band. 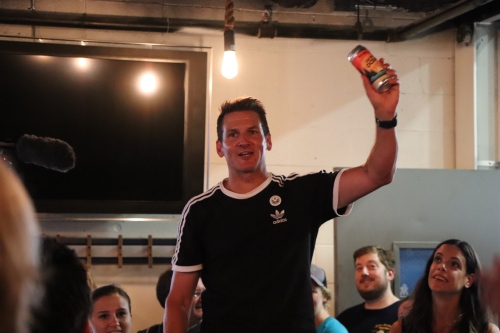 Meanwhile, back at the rainy Thompson’s Point festival site, Luke brought his adorable daughter Mesa on stage for soundcheck…

And people gawked at our 20-foot Guster “air dancers” from the  line-to-get-into-the-show.  Did they really spend their hard-earned money on four of those floppy car wash things for this?  The answer is no.  We spent our money on three of them.  We are getting our money back for Adam’s, his popped and that’s bullshit. 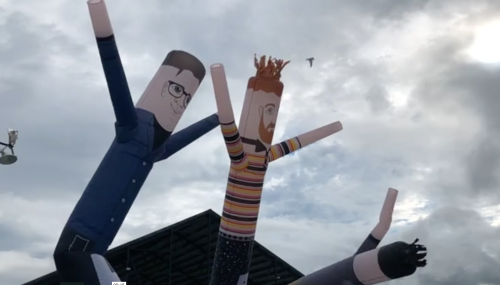 Fans on their way into the show encountered some opportunistic scammers selling cheap bootleg t-shirts of the band:

Zoom in a bit and you can see GUSTER is spelled wrong and it’s not even the members of Guster on the shirt.  It’s Joe Pisapia along with Ben Stiller, Lionel Messi, and the Guy From Home Alone.  What the!?  Okay fine, we printed these shirts and made people from our office sell them on the street outside the festival.  If you’re one of the people that got mad at them for ripping off the band, I hope you’re reading this.  Finally the show was underway… 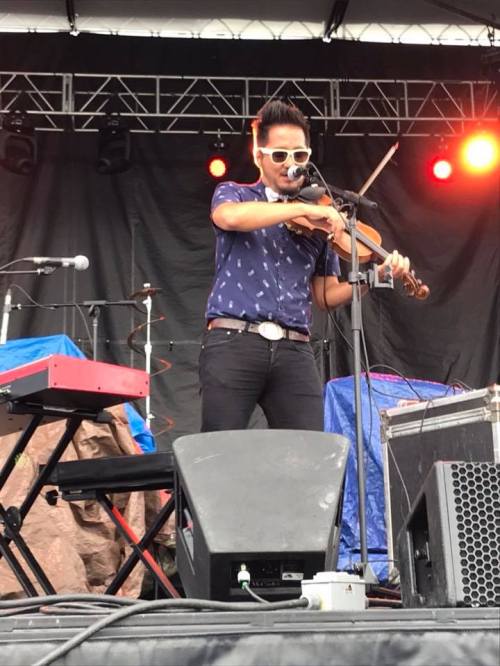 Kishi Bashi brought the house down and then the skies opened up and absolutely soaked On the Ocean 2018 while we furiously checked our weather apps from our dry tent stocked with cans of Pamplemousse La Croix backstage.

The Secret Sisters played a great set and then guess what happened?  Hello Mr Sun…

You can make a rainbow… I know we put fake dolphins and whales in our Endlessly video, but that’s a straight up un-doctored shot from Viv Mallick (thanks Viv), and it’s wicked.  From that point on the skies were clear:

After the sun went down we thought it’d be a good idea to hoist Adam onto a paddle board and carry him through the crowd.  I almost lost a shoe in that muck out there.

Took a while, but we eventually landed on a “second stage” out in the middle of the crowd (“the back row becomes the front row”), where we played a few songs on acoustic instruments — So Long, Demons, and Amsterdam.  This gag went better than expected. 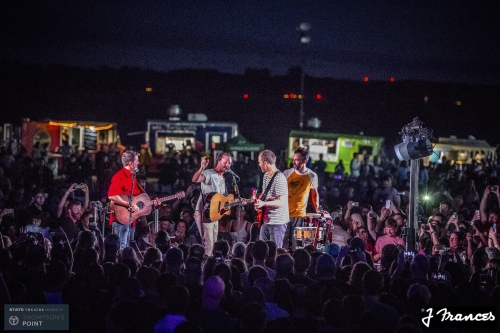 We let our kids wreak havoc on the stage during “This Could All Be Yours” and then brought Kishi Bashi back out and closed with “C’mon Eileen” because it’s just so fun.  It was a truly epic night.

Sunday began with an early morning somewhat ambiguous tweet about a 9:30am acoustic set in front of a minor league baseball stadium.  People showed up! 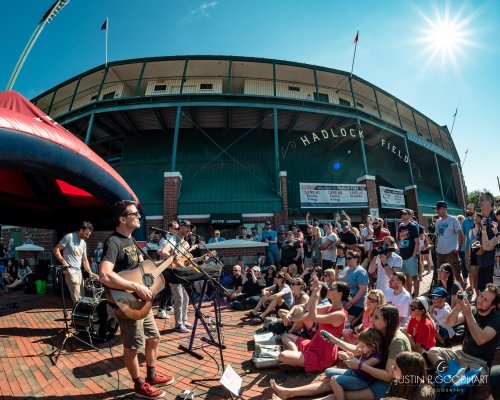 We were trying really hard not to repeat ourselves so the acoustic setlist was a strange one:

x-ray eyes, simple machine, on the ocean, rise and shine, jesus on the radio.

Later, we threw out the first pitch at the Portland Sea Dogs game: 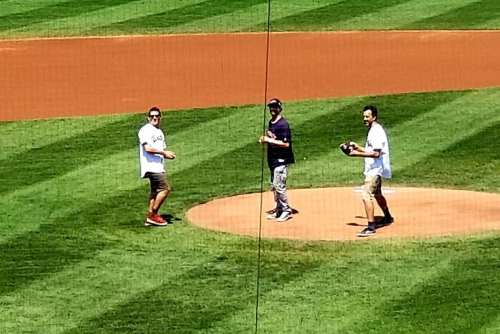 And while this photo of “The Gusterrhoids” seems like a great group of friends having an awesome day at the ballpark, rest assured everyone is secretly suffering from heat stroke and roasting to death in their own hellfire juices.  No one lasted more than two innings.

It feels great to see this community of fans and friends developing before our eyes.  See you all next year!